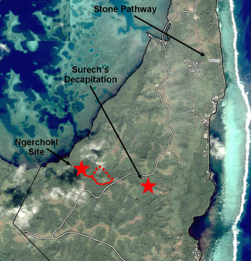 Surech was one of the most beautiful maiden in Ngaraard who se love was so strong that she allowed her lover to cut off her head so she would not have to marry a chief of a village… this is the site where she had her head cut-off!

The story of the island’s magical lake that could bring one back to their youthful years.

Hidden in the jungle is a Fountain of Youth known as Ngerchokl, a river known to have been a magical fountain which can bring back yesteryears in less than seconds. A story between a Mother and Fathers love toward their two sons and ends with a Mother’s Love for her child who searched for a way to be with her daughter for a long time. Ngerchokl’s magical water ended where an older woman bathed, emerging into a young and beautiful woman. Unrecognized by her daughter, the woman decided to reverse the magic and change back to her original self. She chose the love of her child over her own beauty, but because she bathed in the pool twice, the magical powers of the pool were lost forever, the only remains is a little girls footprints on a rock.